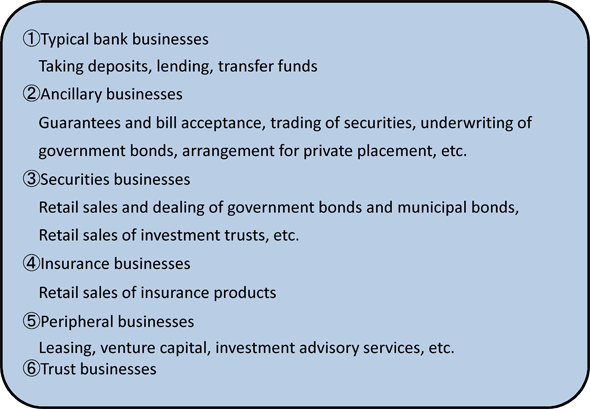 In Japan, the Financial Services Agency (JFSA) serves as a regulatory authority of financial institutions based on the Banking Act.
Banks are corporations that have been established in accordance with the Commercial Code (presently, the Companies Act) and have obtained a license to conduct banking business in accordance with the Banking Act. The Banking Act empowers the Commissioner of the JFSA to request reports and materials concerning the business or financial conditions of a bank (including its agencies), to conduct on-site inspections at bank premises, to penalize misconduct (suspension of a bank's operations or revocation of its license) and to order a bank to hold a part of its assets within Japan. The Banking Act delegates detailed provisions necessary for its enforcement to cabinet/ministerial ordinances from administrative bodies. In order to provide interpretations of laws and ordinances related to financial institutions and guidance/standards for their application in actual business, guidelines and supervision policies have been issued.
On the other hand, the Bank of Japan (BOJ) is not a regulatory authority per se under the Banking Act, but it conducts on-site examinations in order to maintain a safe and sound financial system. These examinations are based on bilateral agreements between the BOJ and financial institutions that have current accounts with it under the Bank of Japan Act. In practice, this includes all city banks, regional banks, regional banks II and trust banks as well as foreign banks in Japan, shinkin banks, securities firms and money market dealers. The BOJ also conducts examinations of banks’ overseas branches.

Banks are subject to various laws in addition to their primary law, the Banking Act. Other principal laws concerning banks are described below.