On November 27, the Japanese Bankers Association (JBA) hosted an SDGs Symposium. (Joint organizers: Regional Banks Association of Japan, Trust Companies Association of Japan, The Second Association of Regional Banks)
In Session One of the Symposium, JBA Chairman, Koji Fujiwara, delivered an opening address on the theme of “SDGs and Finance – What Does the Banking Sector Need to Do?” He was followed by Toshihiko Goto, the Director of Global Compact Network Japan, who gave an address on “SDGs and TCFD – The Approach Expected of the Banking Sector.”
Session Two featured a panel discussion on “Approaches to Challenges in the SDGs - From the Perspective of Human Rights and Gender Equality.” The panel was facilitated by former Nippon TV announcer, Masako Yabumoto, who also served as a panelist. She was joined on the panel by Kazue Yamazaki, Associate General Manager and Head of the Diversity & Inclusion Office of the Human Resources Department at Sumitomo Mitsui Trust Bank, Limited, and Professor Hiroko Akizuki of the Department of International Relations of the Faculty of International Relations at Asia University.
In his opening address, Chairman Fujiwara expressed the JBA’s intention to endorse the Task Force on Climate-related Financial Disclosures (TCFD) established by the Financial Stability Board. 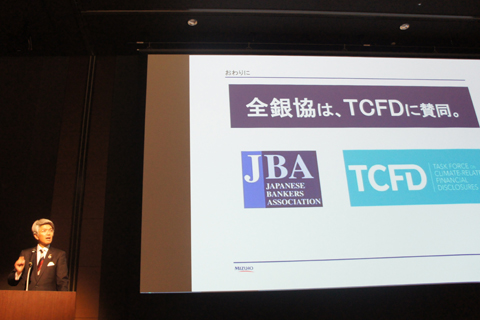